Wait, don’t stop me because I know that you have heard this one before.  I’ve got a two for one post today.  Two of my most made patterns, once again.  But this time I did a few things differently on both of them.

After ending up taking in the side seams some on my Matilda dress after I made it, I decided to alter the pattern pieces on this one before making it.  I did the best I could to draft the band in a way that it would line up at the sides because that is what gets messed up when I alter the fit after the dress has been made.  The sides never line up once I start increasing the seam allowance.  I did okay, but once the zipper was in and the dress was done, I had a wavy back zipper.  I really didn’t like the way it looked, and I immediately figured it was because I tried to change something and that essentially I should just stick to following the directions, as intended.  Maybe in a couple of months, if I lose a few pounds, there will be more room, and the dress will fit without that wavy look is what I thought, so I put the finished dress away to be worn at a later time.  It bugged me so much that I would not be wearing this dress.  I even thought about giving it away.

So I made the next dress you are going to see later in the post, and guess what?  It had a wavy zipper too.  What is going on with me and wavy zippers!  I was so disappointed.  Then I started to think back if I have had this problem before and I remembered that I had.  It was with this dress and the thing I did with all three of the dresses was not cut the bodice out on the instructed grain line.  This dress was a border print and I had to turn my pattern pieces around to get the design to line up how I wanted.  I decided to ask google…

That was it, it was the way I cut out the bodice.  The fix was going to be to take out the zipper and then add some fusible interfacing where the zipper would be.  So, I got to seam ripping, and cut out a couple of strips of interfacing to iron on to the back of the dress.  It worked, and I am so happy with the fit.  It was a dress success!

Now for dress number two: another Monique dress, but made with stretch panne velour as an upper contrast.  This pattern has several ways to change it up.  I hadn’t made a version with a pieced bodice so I thought I would finally give it a try.  The fabric I used for the middle bodice and skirt was art gallery material that I got from fabric.com and it was burning a hole in my stash.  I really wanted to make something out of it ASAP; only problem was that I didn’t have a matching contrast.

Then I remember I had lots and lots of velvety scraps in the perfect color.  I was a little unsure how well different types of fabric would do in one dress: the contrast was stretchy, the cotton was not.  What I thought to do to remedy this was to cut the velvet out opposite the stretch so that it would have the same, or close to, amount of give as the cotton.  It worked just fine until the wavy zipper, remember.  This was because the stretch on the velvet was now up and down and it pulled as I was inserting the zipper. 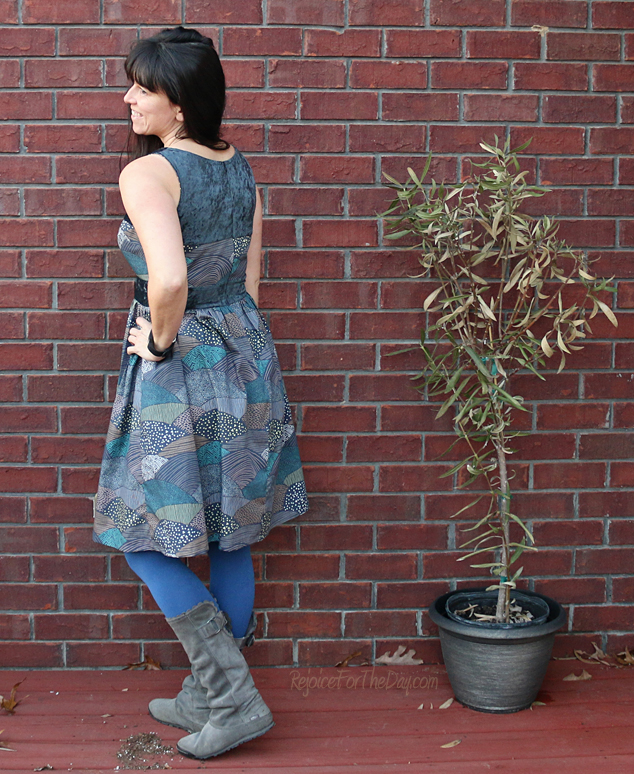 Well, I has very happy that the interfacing fixed this issue as well.  And I probably would have been okay to cut the velvet out the right way after all, but it was an experiment and I had plenty of art gallery material left, and velvet, in case it didn’t work out how I wanted.

I am calling this one the Winter Days dress because I made it when it was most definitely starting to feel like winter.  Also, the colors and the velvety material make me think of winter with those long nights.  (The material I got is called Hello Bear Summit Twilight on fabric.com for anyone interested.)

PS – I still think Art Gallery fabric is one of my favorite kinds of cotton.  It is wonderful to sew and it irons very nicely.  Speaking of ironing, that is the only downside to having this dress with different kinds of fabric.  The cotton irons at a different temp than the velour would.  In fact, the velour doesn’t even need ironing so I cover that part up with a cloth when I do iron this one.

Who’s tired of dress making talk yet?  I have only one more to write about, but I probably won’t get to it until this weekend, if that.  I’m on the go the next couple of days and I am afraid my sit down computer time is limited.  I will be back soon though…

Summer blooms.
Time flies when you’re having fun! 24 years and counting…❤️
June, #1secondeveryday.
Just doing weekend things. Wine tasting and music listening at Arrington Vineyard on this fine day.
From my last photo challenge several years back. I miss taking pictures!
❤️ Ah, the memories.
🎶 Oh, what can you do with a sentimental heart? 🎶
May was a pretty good month! 😍
Well, our nest was just too empty. Meet Molly Pearl, the newest addition to the family. She’s a whole 2 1/2 pounds of fluff and we are all having a great time getting to know her. ❤️