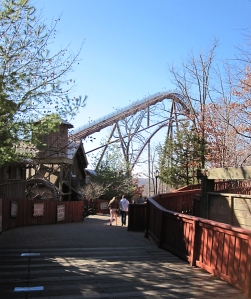 This trip was planned with every intention on being laid back, restful, and one day at a time, and it was every bit that. However, going to Silver Dollar City was one of the two things that we had planned in advance. I have found that buying tickets online is usually the way to go, especially for amusement parks, and this park was no different. There was an online special, $30.00 tickets compared to the $56.00 at the gate; the only catch, they were for Thursdays, Fridays, and Sundays for the month of December. We thought Thursday would be a good day, it would be later in the week and that way our fun would be nicely spaced out. We arrived in Branson to great 60ish degree weather during the day and noticed that on Wednesday night, the temps were dropping to the 30’s and Thursday was gonna be at most in the low 40’s. If we were still planning on going to the amusement park then, we would possibly not get to ride all of the rides, because some of them don’t operate when the weather is 40 or below. Since nothing was planned for sunny 65 degree Sunday, why not go then?  It was a good choice because Thursday we actually woke up to snow.

When we went to Florida, almost two years ago, the boy was one inch shorter than the allowable height for the BIG rides. Such a bummer for him, but somewhat of a relief for me. But now, he has well passed the height restrictions so all rides were ready and waiting for him! He has also gotten older mentally, so I knew that this time if he changed his mind just before the ride was about to plummet down at lose-your-breath speeds, he would be able to suck it up, and wait for the ride to be over without too much of a panic. At least that was my hope. Of course, I had nothing to worry about because he was perfectly fine, and roller coasters are now something he can’t wait to go on.

He had a good introduction, the first ride of the day was described as “a high-flying, multi-looping, cobra-rolling coaster that will leave you breathless! Drop 15 stories and travel at speeds up to 66 miles per hour!” It took my breath completely away, and as I was holding his arm (totally for my sake, not his. I can be a bit of a screaming chicken on some rides until it’s over and I know I survived) I knew he was fine.

We rode everything we could, with the exception of one ride. It was closed for an undisclosed amount of time due to a ‘spill’, but as the biohazard bags were being brought out and we were told the wait was gonna be a while longer, we decided we had ridden enough for the day. We did also pass on the spinning rides and all of the water rides were closed for the season, so it was a good thing we got in to the park with a discounted ticket, otherwise we may not have gotten our money’s worth.

EJ couldn’t stop taking about the upcoming Florida trip we don’t have planned! , I mean we had a great day, and no more child swapping at amusement parks for us!