I am a week late with this post, sorry.  I had a very hard time getting decent pictures of the finished product, and still after the second attempt, I don’t think they came out that well.  But, here it is anyway, my finished Cherry Polka Dotted B6453, fit and flare sun dress.

This was my muslin, first draft if you will, and I will say it came out alright.  Just a little on the bigger than I would like side, but I have already sized the pattern down for my next attempt, and that next attempt will be started any day now – really, it will. 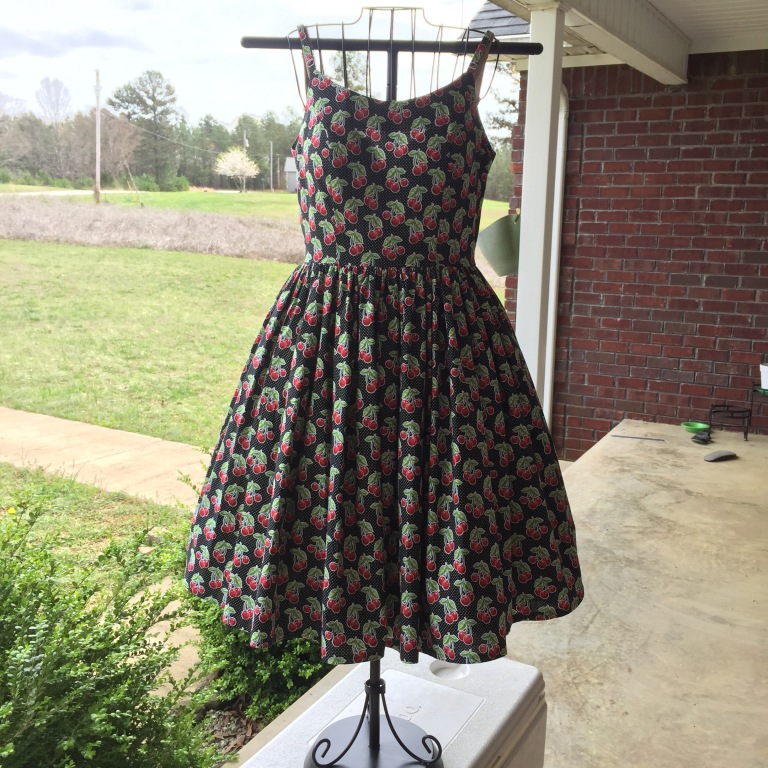 I made it a straight out 12, no adjustments at all until the end when I took the side seam in some to make it seem a little less baggy.  (I usually make a size 10 with most all of the big name pattern brands.)  After I washed the dress, it seemed to fit much better.  This was the first dress in I don’t know how long that I didn’t pre-wash the fabric.  I was being lazy and wanted to get started on it right away.

My apologies for my lack of pictures.  I kind of feel like I looked awful in almost every single one of them, but I didn’t want to wait any longer to get this post up and out of the way.  I really did like this pattern, even after my initial thought of thinking I wouldn’t.  I was wrong.

Maybe the length could be taken up a bit, and the straps could be shortened some on my next make, but as far as this one goes, I will wear it and I already have.  I did end up getting a pair of strap sliders and let me tell you they were worth the wait.  I really like them, and I was surprised how easy they were to insert.  I didn’t have the easiest time trying to put them in as Gertie instructed in the sew along, so I took to google and found an easier way on the Cloth habit site.  I will definitely be using sliders again, and I think I will even be on the lookout for a few pairs of metal ones.

I ended up not waiting for the rest of the sew along to come out, and tackled the zipper and facings on my own using the pattern instructions.  They were easy and pretty straight forward.  I did notice when the dress was done and I actually wore it, that there was an uncomfortable part rubbing on my back close to my underarm.  It took all day of me checking and checking what it could possibly be that was leaving me with a sore spot on my skin before I realized that it was the thread.  When I pressed the dress, I must have ended up burning the polyester thread; and it left a rough spot against my skin.  Note to self for next time, don’t spend so much time with the hot iron on the thread under-stitching seams of the material.

Since I already said some in my previous sew along post, I won’t go into too much more about this dress.  My final thoughts are that I love it, and I can’t wait to make another one, only slightly smaller and hopefully with no burnt threads.  🙂

Who else has made this dress?  I’d love to hear your thoughts.