A few things about this dress right off the start.  April’s theme over on The Monthly Stitch is florals, and this was not my original intention for that theme.  But since this dress took me a whole week longer to make than anticipated, and since it has flowers on it in addition to bikes, it became my Monthly Stitch dress for now.  I was worried that what I had originally planned wouldn’t get made on time, so this will more than do.  This dress was also a bit of a disaster in my dressmaking book, but in the end I think it came out alright.  It fits, and I’m going to wear it, so what else do I need from a dress anyway?

This is the second Vogue dress that I have ever made.  My first, I made years and years ago before I even knew how to properly take into consideration my measurements.  That one, I got rid of, and I only wished I would have kept it around even though it was way too big.  I remember feeling pretty good about my sewing-self after it was finished.  I’d love to see what I thought was pretty good back in, oh, I don’t know 1999?

This dress today, Vogue 8723, was easy, but I messed it up, so I am going to say not my best make.  Everything was going great, and I only had a couple of adjustments to make once I thought I was almost done.  Next thing I knew, I was seam-ripping the whole thing apart. 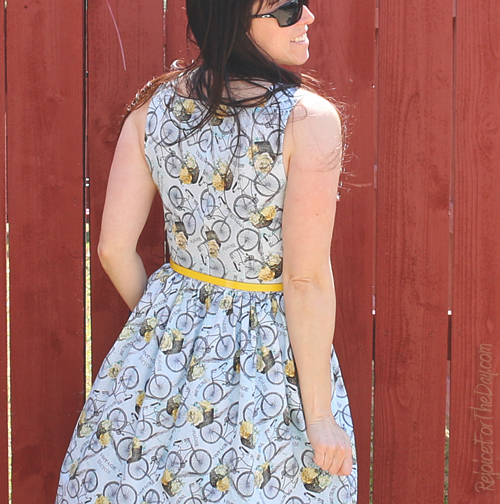 In the end, it still looked like the pattern intended only without being lined, and with a few messy neck bindings on the inside.  What happened was that it was a little snug, and what I did wrong was neglect to take out the side bodice seam of the lining when I took out the side bodice seam of the top.  I didn’t realize this so I got done hand sewing the lining to the zipper, went to try the dress on, and all of a sudden the dress had become too tight.  I couldn’t figure out how I lost some of my lining width while making the dress.  My remedy was to remove the lining completely once I determined I could bias face the armholes and neck without too much trouble.  It wasn’t until days later that I realized where my mistake was made, and just taking out the lining side-seam would have solved the whole problem.  It was too late for that now, but I did also need to cut about half of an inch from the bodice to make the dress fit a bit better, so I went to bed content that all that seam-ripping was still called for.  PS – the more I do and re-do invisible zippers, the better I get at them.

Usually once I get to the ‘rip it all apart’ stage of any make, the dress never gets finished.  I had to do something with this one though cause I splurged on the material at a local fabric shop, and I would have been truly upset with myself not having it be a lovely new dress.  I used every last bit of this material too, there was nothing left over even for a little mistake.

My only pattern modification, besides the lack of lining it, was to not cut the skirt portion out on the recommended grain of the fabric.  This pattern had the grain lines opposite of what I am used to.  The reason I did this was because I wouldn’t have had enough fabric otherwise, and I used just a bit over two yards of material.  I do love the way the dress came out, even despite my reference to it being a disaster. The fit is wonderful, and the straps lie perfectly against my shoulders, no gapping at all.  It even has pockets.  I will be making this one again, and I am not giving up on that lining.  Next time, I hope I get it right.

(You’ll be able to see this post over on the monthly stitch sometime in the next day or two.)

*linking up with: Top of the World Style

5 Replies to “The Floral Bicycle Dress”