Or rather, The Year the Boy Really Became a Football Fan! 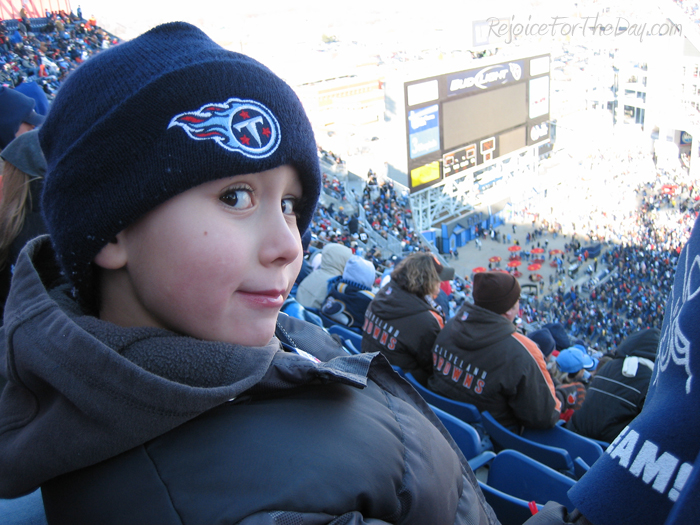 It was supposed to be a surprise, I looked and looked online for tickets. Ebay, stubhub, you name it. Where would I find at least six tickets to an upcoming Tennessee Titans football game without breaking the bank? There are three of us, and three boys of the extended family who would have loved to hear the words, “We got tickets to see the Tennessee Titans, you wanna come?” Well, I found tickets, six of them. Three over here and three more just a few rows down and to the right. Six tickets and four boys who would love to go see the Titans, and did, in fact, get to go to a real live NFL game. (I am not counting my guy in with the four, although he was excited to go to the game, I surely don’t think his excitement was at the same level as the others. And me, well, I was happy to go to Nashville – not a big football fan, but I am a fan of fun, so it was great!)

We left early. We didn’t know where to park, how busy it would be, or how far we’d have to walk. Turns out it was not a problem at all. Garaged parking across the river was very reasonable and made it easy to get out and away when all was said and done. We walked through the downtown area and across the foot bridge, making sure to stop for some photos along the way. We really were early, so long lines to get into the stadium were avoided and we had some time to stop and see what the field really looked like on ground level, because these tickets that we had – which were kinda hard to come by- were for the nose bleed section. Yes, I learned that the nosebleed section is REAL and we were maybe two rows away from the very, very top! These weren’t a last minute buy either, I got them several weeks in advance.

This was four years ago today, December 7th, 2008. The Titans played the Browns, I don’t remember the score, but I remember that particular day in December was cold – I had serious regrets with my choice of footwear. I remember four, okay five, happy guys! I think the younger two were the happiest about smuggled in snacks, hot chocolate and getting to bang on chairs without any consequences! The older two boys, happy to be at the game, regardless of our seating locations.