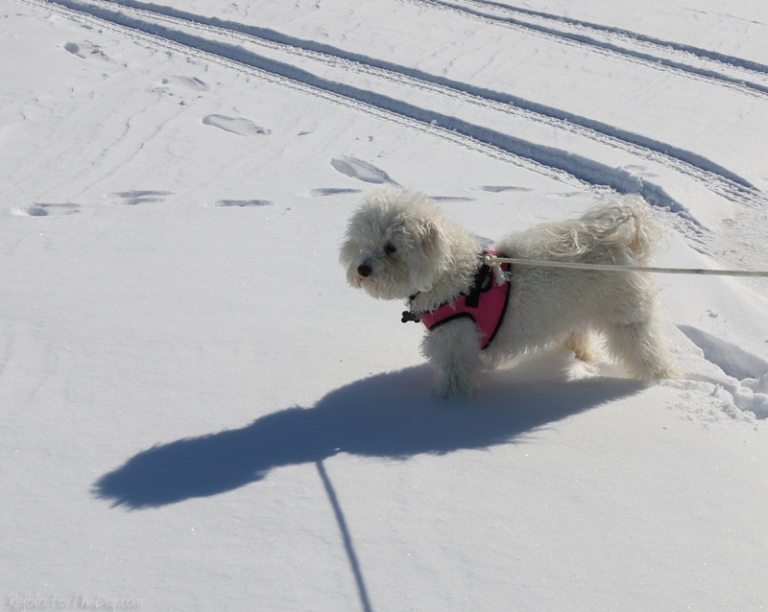 I would say good morning, but it is almost time to be saying good afternoon.  I sat down to blog several hours ago, but decided I needed more snow pictures.  I got up from the computer and dragged the boy outside for a walk, but not before we spent way too long looking for the dog’s leash.  We never found it.

As you can see, we got snow.  Real, white snow.  The kind you can make snowballs with and the kind you can easily walk on.  Not like that icy snow we got two weeks ago.  We enjoyed some time in it yesterday and then this morning.  My first thought was to take a short drive to the state park and get some snowy lake pictures, but after my guy texted me and told me that the back and side roads were not cleared, I changed my mind.  Walking would do for today, and yes, the road out from where we are was still in pretty bad shape.  Neighborhood pictures will do just fine.

The boy and Yuki both love it!  We spent some time yesterday trying to sled; however, it would have been much easier if we had real sleds.  There are lots of broken down boxes in our garage and they just weren’t doing the job.  We tried water skis and those worked a little better, but still they were not sleds.  Next time I come across some, I will be buying a couple, because you never know when it just might really snow in West Tennessee.

We got about five and a half inches, which I think is the most I have seen in Tennessee these last ten years of living here.  It’s also been colder than I’ve remembered, but that is about to change.  Two nice days having snow around is going to have to be sufficient for me.  I’ve had my fun in it, so I will be ready for the melt down.  The weather is going up into the 50’s this weekend and then the 60’s next week.  The snow won’t stay long.  Next, I will be expecting the severe weather alerts, because tornado season is about here, and after all this crazy weather we’ve had, more crazy weather wouldn’t surprise me.

Well,  I will leave you with a couple of our sledding attempts.  These video clips cracked me up.  Definitely in the fail category.  Did anybody else get snow?  What fun did you have in it?

6 Replies to “That Time it Snowed, A Lot”