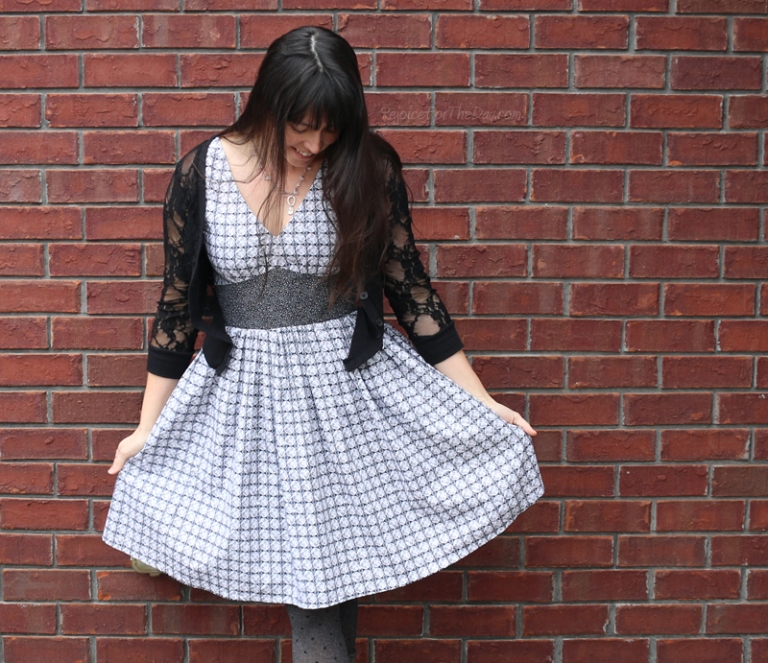 Hello, everybody!  I know it has been a little quiet over here in my neck of the interwebs, but what can I say, I have been busy!  I don’t suppose my life these days is going to get any less busy, so I just need to prioritize my time a little bit better.  For a very short couple of weeks, blogging has taken a brief back seat and I haven’t been posting as often as I would like, but here I am, still around and not going anywhere.

It is, once again, Monday and as I am trying to make a regular theme of Me Made Monday over here, I have another dress that has been added to my ever-expanding wardrobe.  I am calling this one A Marilyn Full of Marbles.  Let me tell ya, it is a little hard coming up with names for dresses.  When I look at this print it reminds me of marbles and the pattern was another from Sew Serendipity, specifically The Marilyn Dress.  Marbles + Marilyn = my newest me made dress, or as it will be called The Marilyn Full of Marbles.  Perfect, don’t you think?

I just love it!  I have said that about a dress or two a time or two before, I know.  (It is wonderful to make things that you truly like.  It’s such a change from those years back when I sewed and sewed and yet had nothing to show for all of my time at the machine.  It would have helped had I bothered to read directions back then.  I, and my friends, have many skirts because of all those silly mistakes of yesteryear.)  But back to Marilyn and all those marbles…  This pattern has a story, but I am going to save it for when I make the dress for which I bought the pattern.  This one I am writing about today, is the practice make.  I found the material, last minute, at Walmart for $2.50 a yard.  It wasn’t until I got home that I noticed it rang up for $3.00 a yard.  I bought 3 yards and $1.50 wasn’t worth my time to take it back and complain.  Plus, I really wanted to have something started before last weekend was over, and I wanted to spend one weekend away from my neighborhood Wally World.

I actually traced this pattern out, so I can say in total, this dress took me five days to make.  All the work I did on it was primarily in the evenings and it came together rather quickly and very easily.  One day to trace the pattern, one day to cut material, one day to make the bodice, one day for the skirt, and less than thirty minutes one evening to hem it up.  Not too bad! 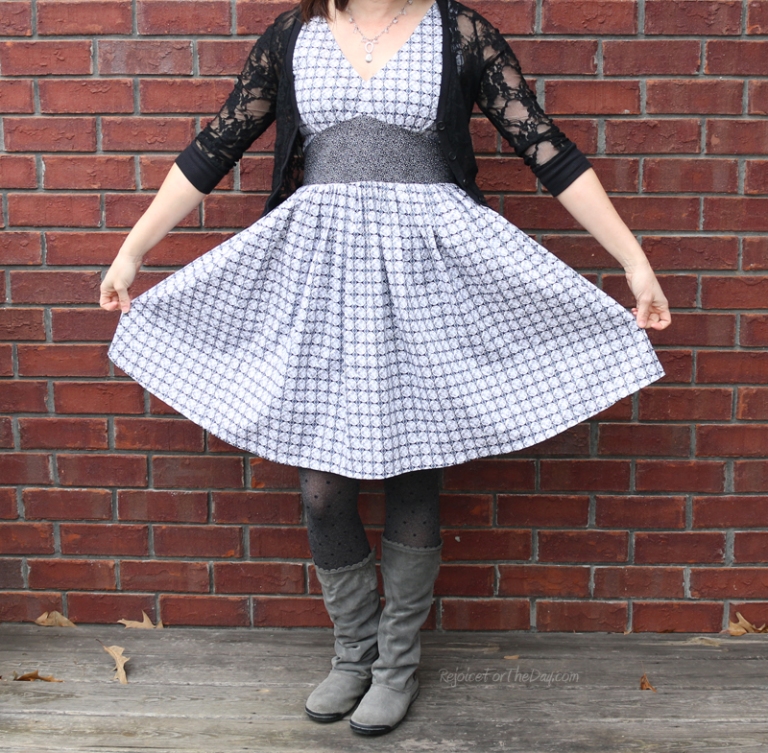 This style is slightly different than Sew Serendipity’s Monique dress, but you sew it up in a very similar manner.  Once I got the zipper in, I did start to see more of the Monique in it though.  Still, it has its own little differences that make it stand out.  My favorite parts about the dress: the waistband, the v-neck, and the full skirt.  What I didn’t like about the dress: I was actually expecting it to be a little longer.  I sewed the dress exactly as directed with no changes or alterations.  One thing that might need a little tweaking, however, will be with the fit around the arms.  It might be a little looser than I would like at the front arm area.  I haven’t decided yet if it bothers me enough to change on the next one.  I would also have to figure out how to change this.  I also might sew it with a smaller seam allowance where the band meets the front bodice.  Having the band a smidge lower here might make me happier.  I did have to take it in about an inch at the back when I inserted the zipper.  This adjustment is exactly the same with the Monique dress for me, so I was able to lay one of those dresses out and measure it up accordingly.  I am thinking about cutting the next size down, which might just fix the arm and zipper issues.  I will totally be able to do that now that I took the time to trace the pattern out on separate paper.

As far as the length goes, it is a suggested option to add a strip on the bottom.  I would have loved to have done this with the same material that I used for the band, but again I am using up my quilt scraps and I didn’t have enough left for that unfortunately.  The length is fine, the pattern pictures showed a bit more on the examples that is all.

The next one you see from me will probably still be a practice dress, because the material I bought with this pattern in mind, was my most expensive material purchase yet, and I DO NOT want any issues at all with it.  Stay tuned, there will be another two of these in the future.

A big thumbs up from me for another Sew Serendipity dress that I absolutely adore.  🙂

Linking up with: Do Tell Tuesday, Tuesday’s With a Twist

6 Replies to “A Marilyn Full of Marbles”